After a recent general committee meeting, Jamia Masjid Bilal is honoured to inshaAllah host Mehfil e Zikr on a regular basis. We are keen to encourage all attendees to participate in these Zikr gatherings and help give nutrition to the soul. The blessed remembrance of Almighty Allah is a core part of building a closer relationship to Him.

From the beginning of time, an inner knowledge and certainty of something beyond the self and within has been held. Signs of nature speak of a power and force beyond time. When tribes formed communities, this recognition became acknowledged and a Supreme Being began to be worshipped through rituals and prayers. As the many prophets appeared, these became formalized in set frameworks. By the time of our Prophet Muhammad sallalahu alayhi wasalam,  great religions had arisen with their own workings. But the best of creation Muhammad Salallahu Alayhi Wasalam completed and perfected the work of His predecessors; the mark of finality of prophethood. He affirmed what others had revealed. This revelation is the heart of the practice of Zikr namely, “there is no reality except the Reality of Allah.” This is a portal into the eternal state of Oneness.

Within Islam the five daily prayers are centered on surrendering to and honouring the presence of Allah. The followers of Sufism go beyond this; their aim is to remember God constantly. To always be in a state of remembrance. There are two paths. One is a solitary journey and the other is by uniting the heart’s longing with a group of fellow-seekers. The solitary journey as well as group practice are essential to the path of the seeker of this way. Whatever is learnt in group practice must be applied in individual living.

ISA (Jesus) Alayhi Salam spent forty days alone in the wilderness and Rasoolullah sallalahu alayhi wasalam took to prayer and fasting in a cave. It was after this self-imposed rigour that Jibraeel (Gabriel) alayhi salam finally manifested himself to Muhammad Sallalahu Alayhi Wasalam. Thus we have to take out the time and create the space to reach out to the Divine. It is only then that we will be able to read His signs and His Book, not just the Scripture but the Book of Life itself. 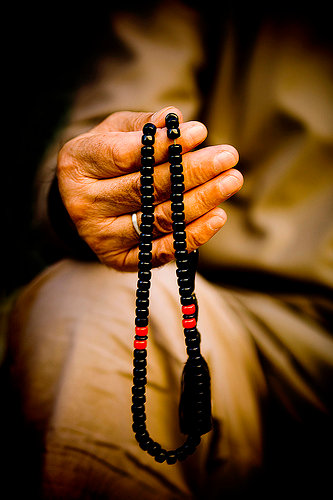 The word zikr literally means remembrance. In Tasawuff it specifically means the remembrance of Allah. The first step to enter zikr is to ask for forgiveness for ourselves and forgive all those against whom we might hold any grudge. This is like wiping the rust off our hearts by letting go of the ego and letting opening our heart to Allah Jalla Jallaluhu. We wipe the dust of material life from our hearts and offer ourselves to the only True Being.

Allah says, “I am sitting with the one who is remembering Me.”

The Quran uses the word “Zikr Allah” 26 times in the verbal form. In many other places an ism or name of God is inserted to emphasise the verbal mention of Allah’s name.

“And remember the Name of your Lord and devote yourself to Him” 73:8.

Zikr demands the articulation of the Divine in the form of one of His revealed names whether vocally or mentally, so that the Dhat [essence] and Sifaat [attributes] of Allah can be understood and experienced. It is never a vague recollection.

The Quran urges people to remember God because true life depends on it. In Quranic language to be forgotten by God is to burn in the Fire, and to be remembered by Him is to be in the Garden. Allah says about those who fail to remember Him in the life of the world, that on the day of resurrection, “Today We forget you, just as you forgot the encounter of this day, and your refuge is the Fire.” 45:34.

Zikr brings about happiness in the hereafter and nearness to Allah in this world. The hearts of the unbelievers are “hardened against the remembrance of God” 39:22. As opposed to them the faithful who are in His remembrance are referred to as, “Those who have faith, their hearts being at peace in God’s remembrance.” 13:28.

Allah says, “Remember Me and I will remember you.” 2:152. This is a unique promise that Allah has made to the believers in the Muhammadan Era. To no community before this had Allah made this promise. Such is the Grace of Muhammad sallalahu alayhi wasalam’s’ descent, the Mercy for the universe, that Allah has taken the act of His remembrance by mankind a
debt upon Himself, which He repays by granting the highest honour to man; that of Allah remembering him. Subhanallah.

Allah asks the Prophet alayhi salatu wasalam to say in the Quran, “Say if you love God, follow me and God will love you.” 3:31.

One of the Prophet’s names is Zikr Allah, and therefore following him is to remember God. The Quran says, “You have the best example in the Messenger, for whoever hopes for God, the last day, and remembers God frequently.” 33:21.

A Hadith Qudsi [a Divine saying spoken through the mouth of the Messenger] says, “O, Muhammad I have made you one of the remembrances of Me. Those who remember you remember Me. And those who love you love Me.”

The benefits of zikr go beyond the grave. Zikr is called the best act of worship by the Prophet sallalahu alayhi wasalam. Every word a person utters in this life will be counted against him in the next life, excepting calling to honourable deeds, forbidding dishonour and Zikr Allah.

When someone complained of Islam’s many commands and prohibitions and asked for a single practice to which he could cling, the Prophet sallalahu alayhi wasalam answered, “Let your tongue stay moist with the remembrance of Allah.”

Such assemblies began to be formed even during the time of the Prophet sallalahu alayhi wasalam and became the model for Sufi gatherings.

Once the Prophet alayhi salatu wasalam sat with his companions and remarked “whenever any of you come across a garden of God you must take shade in it and rest there awhile.” The companions asked, “Ya Rasulallah, here in this world?” and he said, “Yes.” They asked “where can we find such a place here on earth?”, and he replied, “Wherever you see a congregation busy in the remembrance of God, know that that is a garden from amongst the gardens of Allah. Allah has commanded special angels who are the angels of remembrance, to go forth into the world and seek out such people who are busy in His remembrance. And when they find such assemblies they are to spread their wings of grace over them and seek their forgiveness from their Lord until the assembly remains seated. If a person is not one of them but comes only to sit near the circle, he will not be deprived of the benefit of Divine Grace descending on that assembly.” Alhamdulillah.

ZikrUllah - Every Fridays at the Masjid

You can find out more about which cookies we are using or switch them off in settings.